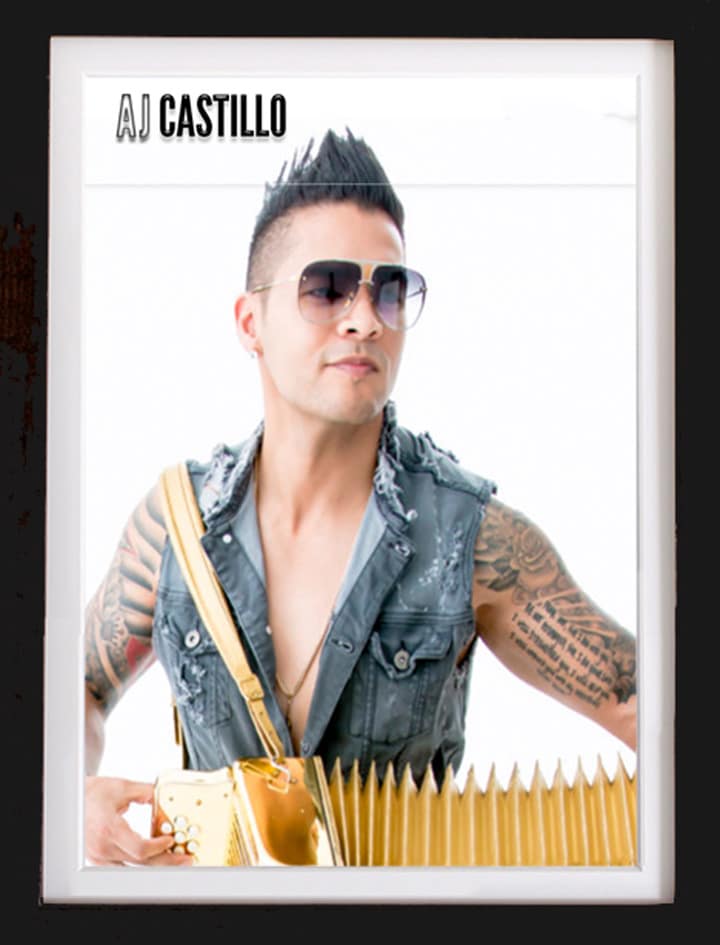 AJ Castillo is a Latin artist known for his unique accordion sound and style, his energetic LIVE performances, and his extraordinary custom accordions. Having lent his musical talent to many artists through countless studio recordings and performances, in late 2008 he felt it was time to step to the front of the stage and introduced a fresh new sound that expands the boundaries of accordion music. From the release of his debut CD in 2009 to his CD in 2014 (Sin Límites) that debuted on Billboard at #15 on the Latin Pop Albums chart (07.26.2014) to his most recent release in 2017, AJ is becoming a well-known accordionist, singer, song writer, performer, and producer.

AJ is a native of Austin, TX, and is a graduate of The University of Texas at San Antonio. Born to a musical family, he was introduced to the accordion by his grandfather. He started playing the accordion at the age of 10 and began his professional music career at 13. Today, this young talented musician is reaching Latin music fans all over the world and is being recognized by professionals in the Latin music industry (as evidenced by his HOHNER, Inc. USA endorsement and his collaboration on the 2017 Latin Grammy Award winning Best Regional Song “Siempre Es Así”).

With the release of each consecutive project, AJ has taken his music to the next level and continues to amaze people with his ability to infuse different styles of music to create his new unique sound. Joining him on this journey is his younger brother and promising vocalist, Sergio Castillo. Sergio brings another level of versatility to the group with his strong vocal ability. Together, they are committed to producing high quality music that can cross boundaries and appeal to fans in all genres of Latin music.