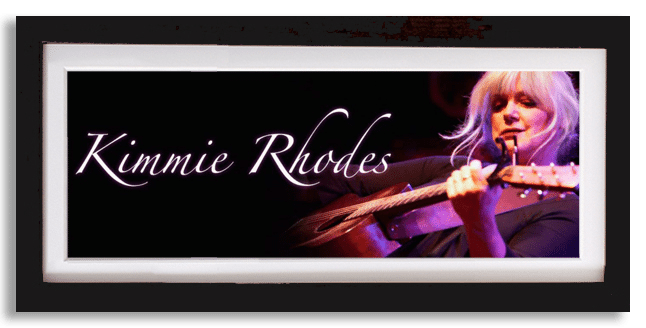 Singer-songwriter Kimmie Rhodes is a native Texan who calls Austin home. Kimmie’s multi-platinum selling songs have been recorded by such stellar acts as Willie Nelson, Wynonna Judd, Trisha Yearwood, Amy Grant, CeCe Winans, Joe Ely, John Farnham, Waylon Jennings, Peter Frampton, Mark Knopfler and Emmylou Harris. A creative and prolific artist, she has recorded and released a total of sixteen solo CDs, written and produced three musical plays and a catalogue of hundreds of songs, and published a novell/cookbook. Kimmie is currently serving as an associate producer for a documentary, “They Called Us Outlaws” to be presented by the Country Music Hall Of Fame In Nashville, TN., a trilogy of feature length films to be dedicated in memory of Joe Gracey and Waylon Jennings, produced and directed by Eric Geadelman. Kimmie is producing radio documentary/music programming for her show “Radio Dreams”, which focuses on the history and musicology of American roots music and artists. She is also starring with Jaston Williams and Joe Ely in a thearical production, “Is There Life After Lubbock and completing a book of memoirs, “Radio Dreams.”